Having been invited to sail Kyle Stoneham’s M20 Vampire at his recent wedding in Lake Garda I met up with Kyle for a training session at Thorpe Bay after the recent F18 nationals at Brightlingsea.

As a seasoned F18 sailor and helm it was essential we put some hours in together for several reasons, namely me changing positions to crew but also to learn the different systems on the Vampire and also to sail with Kyle as we have never sailed together before and teamwork on the vampire is key to speed and manoeuvres. The session went well, we achieved some good time on the water and made sure the revisions that Kyle had recently made to the boat all worked properly so felt ready for the weekend in Holland.

We arrived on Friday at Hellovetsluis just south of Rotterdam and rigged the boat ready for a quick shakedown sail in the afternoon with the other Vampire of William Sunnucks and Mark Self as a training partner to check settings and generally get an idea of our pace and angles, we had a great sail achieving good speeds and especially useful was a long downwind blast to check VMG as we had rigged for no spi and William/Mark used their spinnaker, we had an idea we were fast and so did they so it was interesting experiment as to whether who would come out on top and to be fair there was very little in it!!

Saturday was the main long distance race to Round the Island of Tiengemeten and the forecast looked light so we set up the boat with the kite to make sure we didn’t get caught out if the wind dropped, as we ventured onto the water the breeze had picked up to a steady 15 knots which was perfect for us.

After a mid line conservative upwind start we literally flew away from every other boat bar William/Mark who were to leeward and ahead but as the first gate was to windward it was all to play for, after about 15 minutes and without any other boat in sight it looked like a two horse race for line honours, William elected to go to leeward of a small nature reserve island but we decided to put a couple of tacks in and head round the top side of that island a decision which proved faster as we had more consistent breeze.

At this stage we pulled a commanding lead from them and indeed we could not even see the next boat Xander Pols sailing a Nacra 20FCS.

We led through the first gate and then the wind started to drop and William gained on us as he has a larger main than us and he could foil longer, we struggled at this point and he overtook us and then Xander very quickly became a threat as we could no longer stay on the foils he gained rapidly and overtook us before we got to the end of the island.

The decision to change modes to the straight foils was too late but enabled us to stay in touch till the breeze started to pick up, however all was not lost as they both tried to cut the corner and sailed into weed at the end of the island a mistake that cost William big time and allowed us back in front and not too far behind the Nacra 20. 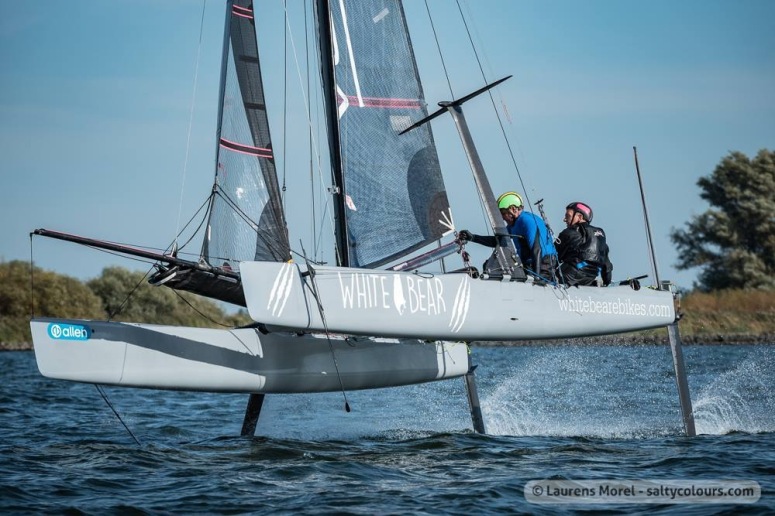 Once through the gate it was time to head back round the bottom of the island and again the wind softened and the bunch of Nacra 20 C board boats pulled through, we couldn’t foil and using the kite suffered until the wind picked up enough for us to foil downwind first with the kite but then a slight increase in breeze meant we could sail without the extra drag of the kite and this was the sleighride home we were looking for.

With the Nacra FCS a long way ahead by the time we were foiling we pushed incredibly hard constantly achieving average speeds of 30 knots+ to try and make up the deficit, we nailed the run home and caught sight of Xander about 5 minutes before the finish and closed him down but couldn’t quite get past as we run out of racetrack to finish 2nd on the water by seconds and 3rd on Handicap as a well sailed F18 stole the race win from the foilers!!

Sunday is round the cans WW/LW course with five races and a much shorter course area it was interesting to see how the vampires would perform, the breeze was again up in the late teens and we smashed the first race by a big margin proving the vampire can work effectively round a small track.

Race 2 we led round again but a counting error/lack of flag visibility meant we went for the finish a lap early and this dropped us down to 6th on handicap, a silly mistake but easily done when you have your mind on keeping the vampire going at such incredible speeds.

Race 3 and again we led round the WW mark in a gusty 25 knots of breeze and no longer fresh with energy put us at the limit of control and ultimately over it as we pushed a bit too hard on the reach to the spreader mark, an angle that foiling boats are hugely overpowered at, suffering a capsize as we hurtled towards the downwind, the data from the GPS showed we were travelling at 32.6 knots when the bow buried due to weight being too far forward and the rig loading up as sails were eased, it stopped abrubtly then just slowly blew over. Testament to the design and build quality of the boat there were no major breakages only bruised egos!!

William and Mark clocked a record 34.6 knots whilst we were on our side and finished all races with no dramas.

After that the racing was canned for the day due to too much breeze and we went home with a 3rd overall on corrected time for the weekend, we were happy but knew we had two big chances to dominate the event!!

The Vampire Project is run by enthusiasts and I must thank the entire team William, Kyle, Graham, Mark and the designers for the opportunity to sail this beast and I can guarantee I will be back for more and more than likely on the back rather than the front of the boat!!

final results can be found here…

One thought on “Ronde Tiengemeten 2018 by Simon Northrop”