Thursday 18th October was a busy day for the Vampire Project, after arriving in Weymouth on Wednesday evening from Tiengemeten, Holland via Essex, it was an early start, rigging in rather blustery conditions that felt much more Autumnal than we were used to. By 10 o’clock it had warmed up quite nicely and the boat was not too far off being ready to launch.

A quick phone call was enough to divert William Sunnucks, who was on his way to visit his youngest daughter at Exeter University. Will arrived shortly after 10 and his enthusiasm in the project captured the attention of the organisers who were insistent he came out on a rib to talk them through what the boat was capable of. 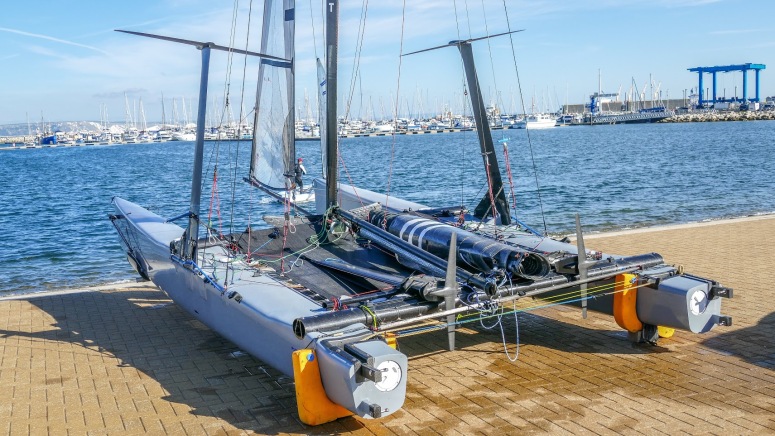 After filling out the necessary forms and taking custody of the GPS tracker and event rash vest the Vampire was registered for Weymouth Speed Week which is the oldest and longest-running speed sailing event in the world.

The challenge is to record the highest average speed across 500m from a set starting point, the course was set on the West side of Portland Harbour with the breeze coming from the East. Wind had been up at 23knots average for the morning dropping to around 18knots in the gusts at midday when we launched. This made for relatively choppy conditions at this side of the harbour.

Kyle drove over without a crew but you don’t have to look far for talent around WPNSA! Foiling friend and rival in the Moth class, 49er double Olympic medallist Simon Hiscocks stepped up to the plate for his first taste of the Vampire.

As you can imagine it really didn’t take long for Simon to learn the ropes, after about 5 minutes on the water they put a run down the course. The start gate felt no more than 25feet wide so it was a job to hit the line at full chat in the waves and gusts, their first attempt averaged 25.4 knots as the windward hull touched down just before the start and scrubbed a lot of speed off.

“This boat is mind blowing, probably the fastest thing I have ever sailed and a serious amount of fun! The way it has been designed and set up makes it so stable in the gusts and the chop, the scary thing is you can feel how much more there is to come from the concept with future development.”

Kyle and Simon headed upwind again, both on the wire at 21knots and sailing angles that you would be happy with on a keel boat! Taking the bear away quite gently so they could time the gybe and hit the layline to the start gate precisely, they began their approach – there was an upside down 49er FX which got a little wave on the way past.

This is the onboard footage of the fastest boat run of Speed Week 2018 by Simon Hiscocks and Kyle Stoneham, the boat lived up to the organisers new found expectations that William had given them.

After the 2nd run Kyle swapped positions with Simon so he could steer for the rest of the session, they put down a couple more runs but the wind was gradually softening and the chop not getting any better so they accepted it was unlikely any faster times were going to materialise that day, instead spending the time sailing windward leeward courses which the boat is optimised for.

Hiscocks enjoyed his time on board, “This boat is mind blowing, probably the fastest thing I have ever sailed and a serious amount of fun! The way it has been designed and set up makes it so stable in the gusts and the chop, the scary thing is you can feel how much more there is to come from the concept with future development.” 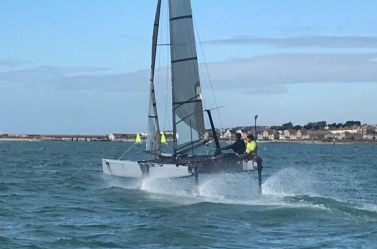 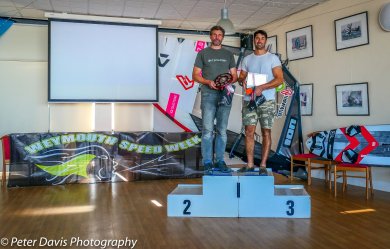 Kyle and Simon may well do some long distance events together on the Vampire in 2019. Thanks to the speed week organisers and Weymouth and Portland Sailing Academy for use of their world leading facilities.

Thanks also to Shock Sailing for engineering a new component for the board lock down mechanism after a spectacular failure later that day – footage of that blow up to follow in the Ben Saxton interview soon!