How fast is a Vampire?

Some notes from the 2019 Round the Island Race

How fast is a Vampire?  The annual Round the Isle of Wight race provides an opportunity to find out.  You can line up with some of the fastest yachts in the world, some with expert crews flown in from overseas.  The 50 mile course gives ample space for the Vampire to show its worth.

This year’s race provided a range of conditions from dead calm at the Needles through to full upwind foiling in 15 knots around St. Catherine’s Point.  Due to the light winds only 288 of the 1161 starters actually finished.  See the photo below with the tide drifting yachts far past the Needles.

Fortunately the Vampire has a better non-foiling mode than most foiling multihull designs, an advantage of its gull wing foil system:  but every switch from foiling to displacement is disruptive and drains energy.  There is no doubt that our performance would have been better with more consistent wind.

The 100 foot trimaran Actual Leader was in a class apart, finishing in only 7hours 33 minutes, 1.5 hours before the next boat, and 3.25 hours in front of the Vampire.

Actual Leader is the rebranded Sodebo Ultim (a 2014 rebuild of the 2001 Geronimo) which holds the round the world speed record.  It has one straight dagger board on the centre hull located in front of the mast, and C foils on the outer hulls to provide lift.

After Actual Leader the front of the fleet was dominated by monohulls ranging from high tech 42 footers to 100 foot super yachts.

Only one multihull other than Actual Leader made it into the official top 20 – Black Marlin a 30ft carbon fibre trimaran from Denmark.  We used her as our benchmark when we peeled off from the course to head back to Hamble adding 6 mins to her elapsed time to take account of the two monohullsbetween us.   We started 10 minutes behind, overtook her upwind just after St. Catherine’s point, but lost her when we struggled to foil between the Forts.

Of the 40 multihull entries only 13 finished the race.  We would have been 3rd multihull and 17th to finish if our entry had been official. 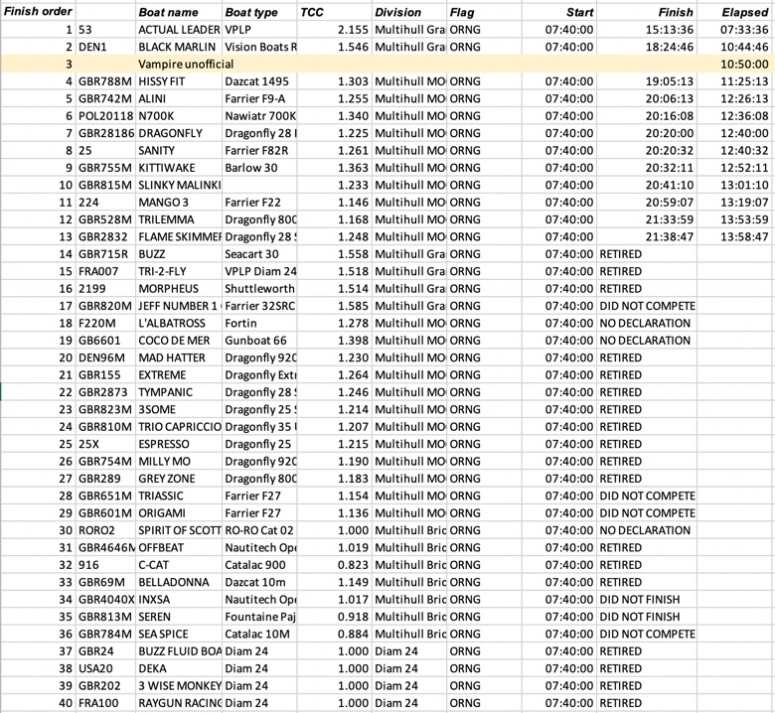 Actual Leader is 5.1x the length of the Vampire.  Big should be faster in proportion to the square root of the waterline.  A slightly more plausible calculation would be her SCHRS rating of .508 – double the speed of an F18 which is 1.000.  This takes account of her rig size (which is much smaller than a scale up), and weight (which is lighter than a scale up).  See the comparison table below – areas should scale up ^2, volumes and weights ^3.

We observed similar performance from a MOD 70 last yearwhich disappeared over the horizon in equally light winds.  In yachting size clearly matters.  See the tiny pink spinnaker of the Vampire below.

There is no official class for beach catamarans so the entry has to be unofficial.  We provide our own safety Rib, this yearmanned by experienced sailors, Rob Gutteridge, RichardSpooner and Mike Hare.

Our sailing has to be super-polite, starting just outside the start line at 7.50am.  Even when we have right of way we tackor flap our spinnaker early to make it clear that we don’tinterfere.  And we aim for safety measures that will pass scrutiny should anything go wrong.

Our original plans were disrupted when Kyle Stoneham was called to sail for team Nacra in the F18 World Championship in Spain.  So Josh O’Brien stepped in to crew GBR1 with William Sunnucks helming.

The Course – 50 miles anti-clockwise around the Isle of Wight

We started downwind at Cowes foiling fast with just two sails.  But the wind quickly dropped and the spinnaker came up as did the foils.  We got back onto the foils after Hurst Castlewhen we took a long tack West hoping to avoid a huge glassy patch we could see in the lee of the Needles.  But we were heavily punished for this vanity when we dropped the spinnaker and headed into the same hole as the others, drifting a mile beyond the Needles with the tide.  Eventually new wind found us and we foiled upwind most of the way to St. Catherine’s point where it paid to stay out to sea despite the tide.

The patch from St. Catherine’s point to Ventnor was the best of the race.  We were short tacking close to the shore and taking the monohulls in bunches.  We could show good height at 17-18 knots of boatspeed, sometimes more.

As we started to cross Sandown bay the wind dropped and veered.  Instead of tacking the leading yachts pushed on into the header, obviously informed by some good weather forecasting.  We stayed high, looking good at times, but we eventually paid the penalty when the yachts tacked into more breeze.

We had another good patch after Bembridge Ledge when there was enough wind to foil downwind straight through the lee of some big yachts, and the yachts disappeared behind us.  But the wind dropped at the Forts, some huge spinnakers took our wind, and the adverse tide pushed us backwards. Ouch.

We should have spent more time thinking about the weather which was for a variable Easterly veering to the South.  A south Easterly on the South coast is the most difficult direction for the sea breeze as laid out in David Houghton’s famous “Wind Strategy”.  Certainly the yachts seemed to know exactly where to go and were normally right.

The weather was the lightest for several years.  Here’s an analysis from Dick Spooner showing that despite the breezy bits only 4 boats finished within 10 hours, less than in any previous year.

This year was even more difficult than 2018 when we were 4thfastest round, beaten only by a MOD70, a TP52 and Ran.  Just before the Forts it looked as if 3rd was a possibility – Jethouand Actual Leader were over the horizon by then.

The Vampire punches massively above its weight.  But in yachting size matters, and the biggest multihulls will beat us even in light winds.  We should be able to beat all monohullsin breeze, but we haven’t had the opportunity to prove it yet.

Next up is the Centomiglia Race on Lake Garda, a chance to have a crack at the GC 32s which may struggle if the wind is light because their lifting foils remain in the water.